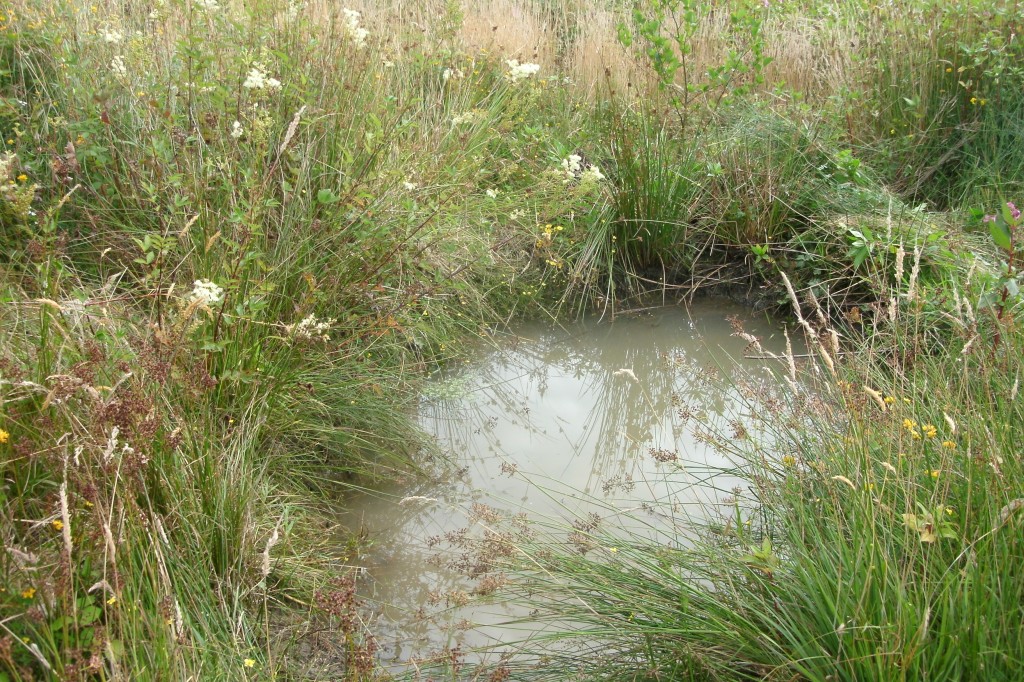 Taking a walk with the dogs around the field, I took these pictures. I feel that the photo of the little Dog Pool captures the essence of summer here; greenery and wild flowers almost hiding the pool away and the water all stirred up with clay from the bottom where the dogs have jumped about and sat in it. Well, after all, it was originally made for them – somewhere they could cool off and enjoy!

The willow tunnel leads away from the hard standing and the Hafod, down into the less frequented area of the field where most of the trees have been planted. It seems quieter here somehow, and for now more open to the sky – if that is possible! A good place to lose oneself in the magic of the meadow. 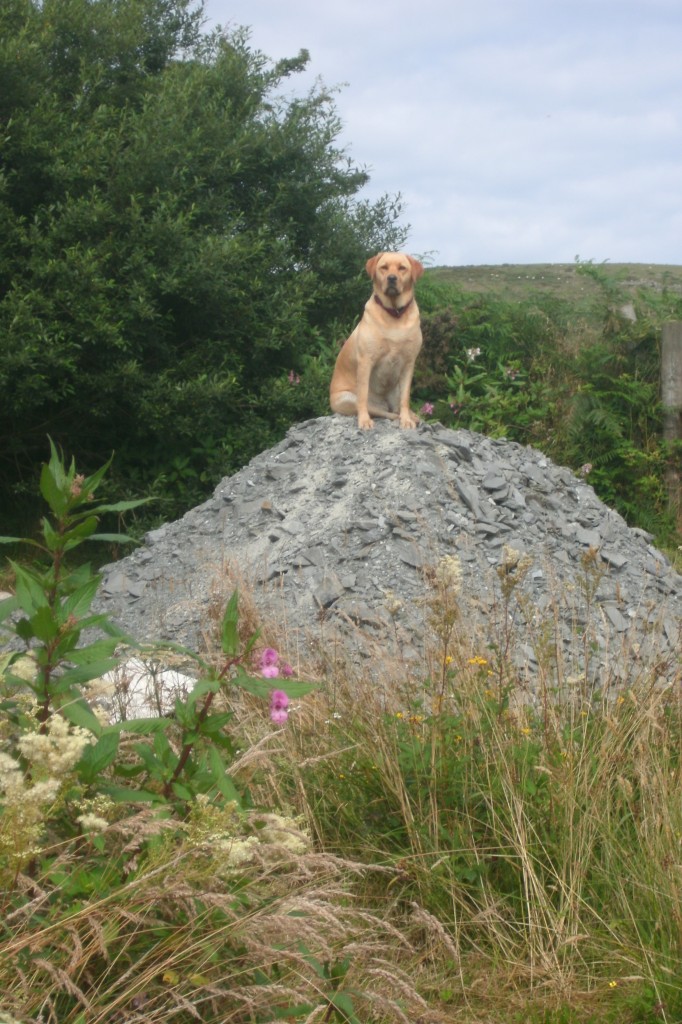 Here is Melly – one of our two golden labradors – sitting on top of a pile of stone proudly surveying her little kingdom! The stone is actually piled at one corner of the hard standing, waiting to complete the path to the hafod this winter. 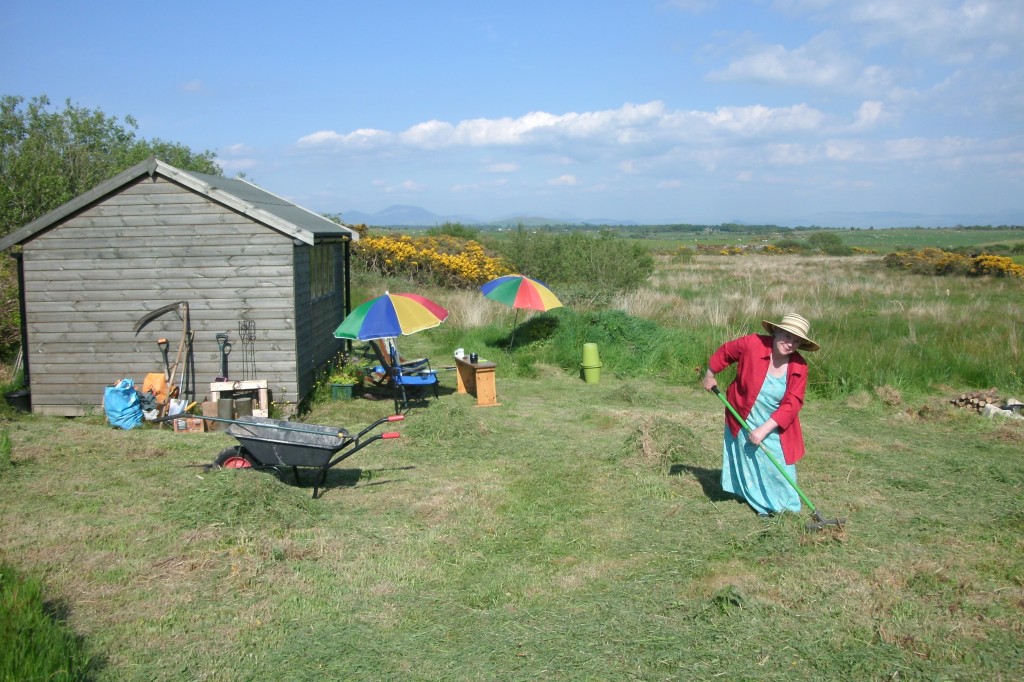 That is very much what I felt like. A medieval peasant working out on the land. When the grass is cut or trimmed around the Hafod and herb beds, it is my job to rake it up. The cutting is done by a petrol-driven strimmer – although note the large scythe standing against the back wall of the Hafod. I seem to be the only one willing or able to use it! Using tools and performing actions as our forebears have done for tens of thousands of years before us instantly puts us in touch with all the hundreds of generations who have done the same tasks in the same way in an attempt to cultivate the land and so keep body and soul together. It connects you to a different basic rhythm of life and you can feel the strain in your back, the calluses on your hands, the burn of the sun, the heat, sweat and exhaustion of those many who have gone before us; but also the love of the land, the love of life and the satisfaction of a job done.

I thought I’d take this opportunity to remind/share with everyone that tonight is Earth Hour. For those that don’t know, this is a yearly occurrence where all over the world at 8:30PM local time, people and places switch out the lights. The reason for this is to attract attention to the unsustainable usage of the world’s resources, particularly energy.  But it goes way deeper than energy, and people yawping about solar panels as far as I’m concerned. Take a look at the Earth Hour webpage, and this youtube video, to fill yourselves in…

…Good. Now you’ve done that, I’ll continue with the real thrust of my post.

A lot of the discussion over Earth Hour centres around the gross practicalities of energy/resource consumption. Who can blame the poor muggles for this; it is a typically capitalist reaction, the capital being discussed here being the Earth’s resources and the impact we have on them. Naysayers will say that there is no point to Earth Hour, that the power stations keep puffing out smoke anyway, and that all people are doing is causing more pollution by burning candles and generally making twats of themselves. Jeremy Clarkson even goes as far as switching on all his appliances in counter protest. Fine; that is irrelevant. 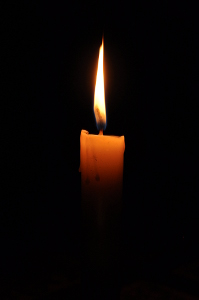 Take time to celebrate the spirit of community this Earth Hour!

I am an ardent supporter of Earth Hour, but my reasons have nothing to do with protest, or people yawping about wanting solar panels on their roof… such people usually don’t know what they’re on about anyway. My reason for supporting Earth Hour can be summed up in one word. Community. Let me tell you a story. The first Earth Hour we participated in, 5 years ago now, was the first or second year the event took place. We only heard about it a couple of hours before, so we thought ‘why not’; switched off the mains and turned off all our phones, etc. Shared our evening meal in candle-light and talked. And something magical happened. It was as if peace had descended on our family… we talked in a depth never usually experienced in the evenings, while at the same time relaxing. We laughed, and shared as a communal unit. Even my senile grandfather, who was usually out of his tree started joining in and talking and laughing with us – and more or less coherently too. Even when the lights came back on, we went to bed earlier and slept better for it. Watching others on the news the next day, I believe our experiences to be typical: seeing images of people in Australian parks in the evening sharing candle-lit picnics with total strangers while laughing and talking… and the same in many public (and one presumes, private) places. How often do you see that these days?

So irrespective of whether or not it has any effect on the electricity grids (and the Australian grid reported a 10% drop in demand), it is having a huge benefit by boosting our capital. Not of money, or resources, but of community, happiness, and inclusiveness. Even if the world was on 100% renewable energy tomorrow, if Earth Hour happened, that same community united in connection would happen. You could argue that it is a group meditation as people participate. You could say it is like praying as a group. Whatever you call it, do it. And doing it with a group purpose in mind, namely turning our attention to looking after our planetary home, is surely a noble cause. And a great way of turning our attention to such issues; united in community we can tackle any problem or challenge. It is the best attribute of our humanity.

This is really what the spirit of Cae Non is about… every time we gather in the Hafod after a hard day’s work, and eat our meal in candle-light, talking, laughing and listening to the crackling of the stove and the singing-purr of the kettle, we are creating that same energy and community on a smaller scale. So, why not join us in that spirit at 8:30PM for Earth Hour? Gather in your family group, or as a group of friends, put out the lights and switch off your appliances (especially phones and computers!), light a candle, and share a meal or a few drinks. You may just be surprised how rich an experience it is.

And if you’re the stingiest, most pessimistic capitalist, try it anyway. You might be surprised on the effect it has on you… you will have gained an amount of an additional type of capital, the value of which may surprise you.

Planting the heart of Cae Non

Today, just three days after Valentine’s Day, I planted the heart of Cae Non…. literally. Some of the red willow which I helped to cut a couple of weeks ago has gone into the planting of the heart-shaped centre of the Labyrinth in the middle of the land. As I worked, pushing the 6′ lengths of wood diagonally into the ground and weaving them together to form a 4′ barrier (or “fedge”), I felt myself connecting deeply with the spirit of the land and the joyful energies there. I planted not one, but two hearts… the one made of willow and my own. It was a profound experience of coming together with all the diverse energies I have been touching upon in relation to this whole project this last two years, but more importantly – and very distinctly – I felt my own roots sink deeper and connect with something vital, sacred and precious. In golden February sunshine, under a firmament of pale blue, with a half moon sailing high in the sky above me, I sensed the heart beats synchronise, mine with that of the land…. the Earth…. the Goddess in her early springtime youngest Maiden form… and I was literally enchanted! 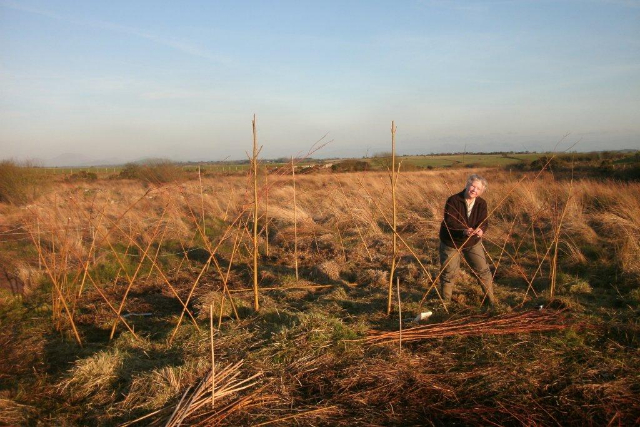 Later, after dinner, as I walked across the field in the moonlit darkness, the land seemed to swirl and flow about me, responding to and “dancing” with me. The sky was utterly clear and ablaze with stars; the breeze sharp with the scent of promised frost before dawn, the path behind me shining in the moonlight like a silver ribbon…. but I could feel the stirring of spring and our duel energies pulsing as one, and I rejoiced.

I feel that today I have planted very much more than a few dozen willow whips… an ancient and priceless alliance has been re- formed, one which will grow year by year and reach out into many hearts, and hopefully bring healing, understanding, fulfilment and joy to all who come into contact with this place, no matter how tenuously or briefly that might be. If you stop and quietly listen, feel your own heart beating within your chest, you may hear another, second heartbeat… the same rhythm I sensed today; the pulse of the eternal cosmos… that which joins us all together… just listen…. 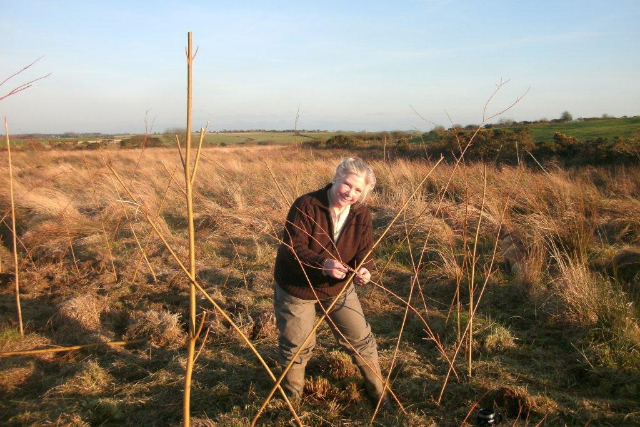